“I don’t understand anything about the ballet; all I know is that during the intervals the ballerinas stink like horses.”
Anton Chekhov (via goodreads.com)

Videos like “Thought of You” by Ryan Woodward or this beautiful ballet performance pointed me to the idea that perhaps ballet is something for me (as a spectator that is).

So, given that the next ‘big’ city has a ballet, I ordered a ticket for the performance of “The Taming of the Shrew” at the ballet in Stuttgart (Germany). Giving that when I want to try out something, I either do it the best I can or not at all, I went for a relatively good ticket (first category, first row immediately in front of the orchestra pit, slightly to the right). After all, why pay less money for a shitty seat when you can pay more than trice the amount and get a seat where you can hear the dancers feet hitting the dance floor (which actually was quite distracting). Still, the view on the dancers and the orchestra was excellent and well worth the price.

(Did you know the orchestra musicians are pragmatists and leave before final curtain falls? They stay until they get pointed at by the conductor, then leave immediately after. Dancers get the spotlight, but in the trench the light never shines. The only person who lingered on was the woman playing the harp — she needed to cover her instrument which took some time. Perhaps ‘the pit’ is not the right place for an orchestra — perhaps putting them high on the stage would be more … conductive and appreciating of their work.)

Anyway, there were some slight inconveniences, which I vented during the break on Twitter (and corrected after talking to the mother of that brat after the break): 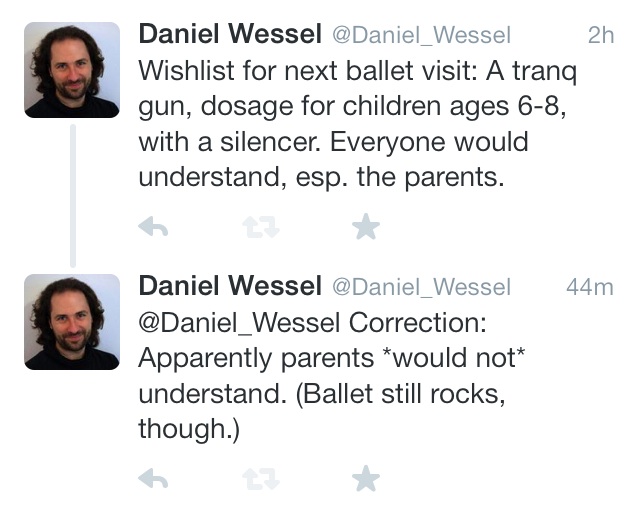 (seriously, the ballet performs in an Opera house — a place that is build for acoustics — how hard is it to understand that even a whisper carries a couple of rows and tears your connection to the dancers on stage?).

But otherwise — the performance blew me away.

First of all, there were the dancers. At times, it reminded me of master level martial arts — the grace and the … play with gravity and inertia was amazing. Hmm, the only distracting element (beside the whispering brat behind me that I wanted to throw into the pit) was that I had watched a couple of “Breaking Bad” episodes on the same day and the days before, and somehow I had “Jesse Pinkman“‘s reactions to the performance in my ear, ranging from “Yo, that’s awesome!” to “Yo asshole, where are your trousers, bitch?” Very distracting. Still, impressive dancing.

(And seriously, why do women wear nice dresses — which swirl even nicer with movement — while men walk around looking like they forgot their trousers. Look, I know that these men are much, much better trained than I’ll ever be, and they have supermodel looks. And I say this without envy, I don’t need to see their leg muscles too. Why do they have to look like the angels from Dogma? Seriously, how did this start that men wear such an outfit at ballet performances? You’d still see their grace even with suiting trousers on.)

And then there was the story. I knew the plot of “The Taming of the Shrew”, but the ballet version actually adds it’s own interpretation — or at least, I saw a specific interpretation in it that I find more interesting. At times, the interplay between the “Shrew” Katherina and her suitor (and later: husband) Petruchio reminded me of Jacqueline Carey’s second Kushiel trilogy, esp. the quote in it:

“Why do we fit so well together?”

While all outward appearances might point to a huge mismatch between the ‘shrew’ Katherina and her suitor Petruchio (who states that he is only interested in the dowry), beneath the surface they are exactly the same. Both have no love for the norms of society.

But while Katherina is an unhappy spoilsport — angry and depressive while resisting these norms (at the beginning of the play) — Petruchio has fun with them. He shows Katherina how easy it is to violate the norms of decency and be an ass. There’s nothing to it — it’s easy being a spoilsport and act without considering the negative consequences for others. He even goes beyond the things Katherina did (e.g., by drinking the priests wine, if I remember correctly).

It’s easy, it’s no big deal, it’s a bit trivial and self-harming. However, his not taking anything seriously and flaunting that he is only interested in money is also a bit banal.

But together they end up both taking their criticism of the norms of society seriously and having fun with them at the same time. Although Petruchio’s behavior to “tame” Katherina would qualify as torture at times (keeping her awake, denying her food and shelter), they end up being stronger and smarter together. And they have fun going their own way and making a parody of the norms of society at the same time. It’s a beautiful irony that — at least in my view — shows beautifully in that ballet performance.

Katherina
Let me entreat you.

Petruchio
I am content you shall entreat me stay,
But yet not stay, entreat me how you can.

Katherina
Now if you love me stay.

Shakespeare — it doesn’t get more classy that this 😉

Anyway, I highly recommend visiting a ballet performance. And a good tip I got from the introduction at the ballet — don’t just focus on the main dancers. Watch what happens in the background. Sometimes important parts of the story are conveyed this way.

P.S.: And yup, looking at what ballet does to a dancers body … woppa. I stumbled upon this quotation by Stephen King that shows … something else:

“But he had never seen Myrna in practice…never that close up. He had been impressed and a little frightened by the contrast between seeing ballet on stange, where everyone seemed to either glide or mince effortlessly on the tips of their pointes. and seeing it from less than five feet away, with harsh daylight pouring in the floor-to-ceiling windows and no music- only the choreographer rythmically clapping his hands and yelling harsh criticisms. No praise, only criticisms. Their faces ran with sweat. Their leotards were wet with sweat. The room, as large and airy as it way, stank of sweat. Sleek muscles trembled and fluttered on the nervous edge of exhaustion. Corded tendons stood out like insulated cables. Throbbing veins popped out on foreheads and necks. Except for the choreographer’s clapping and angry, hectoring shouts, the only sounds were the thrup-thud of ballet dancers on pointe moving across the floor and harsh, agonized panting for breath. Jack had suddenly realized that these dancers were not just earning a living, they were killing themselves. Most of all he remembered their expressions- all that exhausted concentration, all that pain… but transcending the pain, or at least creeping around its edges, he had seen joy. Joy was unmistakably what that look was, and it scared Jack because it had seemed inexplicable.”
Stephen King, The Talisman (via goodreads.com)