Computers may be the epitone of rational thought and logic, but buying and working with a computer can be a highly emotional affair.
Henry J. Wilcoxen-Ash

A few weeks ago I needed to upgrade to Mavericks — XCode did not allow me to develop programs for iOS7 otherwise. So I did a quick “upgrade” — I just installed Mavericks over my prior OS installation.

Given that I was using my MacBook Pro for about two years (or more?), probably not the best solution. The resulting system was slow and buggy.

From time to time — no matter whether Windows or Mac, it pays to do a clean install. Get rid of all the “pollution legacy” you have incurred over time.

The clean install went reasonably well by following these instructions here (I think). In my subjective impression, the system now is more stable and faster — with two exceptions (so far).

First, Circus Ponies Notebook crashed a couple of times when I use the “cmd + n” to create a new Notebook (selecting “File” “New” from the menu worked like a charm, though.). But at the moment, it seems to work just fine (probably solved due to a reboot).

Second, my Adobe Creative Suite 4 Acrobat installation requires me to enter my admin password each time I start it. 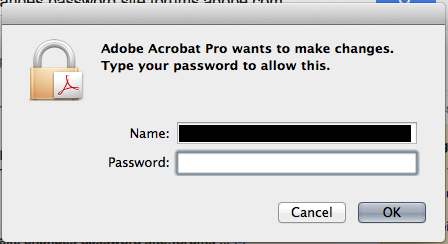 It seem to be a common problem, probably solved via updates (strangely enough, it does not find any updates, they are probably discontinued … hrrrrmmm).

One thing that really annoys me is that I made the mistake a while ago to buy series/movies in Apple’s iTunes Store and that these files use DRM. When I wanted to watch an episode during some tedious reinstall, I got this message:

Normally, this is a non-issue. Just authorize the computer and everything is fine. But it still bugs me. It’s like having a beautiful toy in a box that requires someone else to open. But in the future, I’d rather purchase used DVDs and make a digital copy than to buy anything ever again in the iTunes stores that has DRM. It’s just inconvenient. I want to have control over the things that I have bought.

Still, I think doing the clean install of Mavericks was a good idea, mostly for two reasons:

The second issue deserved a little bit of attention. The nice thing if you wipe your drive and do a clean install is that you are getting — essentially — a new computer. You can make changes that are not just incremental but more deeply. Rethink what you need on your device. Given that external hard drives are cheap, it pays to get a couple of them and do a lot of backups so nothing gets lost. But then you can start from scratch and customize the programs not as you used to work, but as you need to work now. My changes were mostly cosmetic (besides going from 40 GB of free space to 460 GB of free space), but still, I think it makes a difference. For example:

When you install your new OS — document it. Not only the current system settings and installed programs prior to reinstall. Use Grab’s screenshot functionality (or simply press “cmd + shift + 3” to do a full screen screenshot or “cmd + shift + 4” to select the area you want to capture) to document what you do when you reinstall it. It’s one thing to make screenshots of what you used to work with, but quite another to make it so again. Personally, I have some problems with the permissions for my DokuWiki (part of the science@organizingcreativity.com project) after my reinstall. I solved the problem under the last OS, but I have no idea how. Screenshots would have taken care of that problem.

But overall, I’m … not happy but content with the reinstall. If you are planning to do one yourself, you might find this posting helpful.