“In the course of reporting this book, I was constantly amazed by how many of the adults I talked to could access, with riveting clarity, a memory of childhood bullying. It was as if they could reach inside themselves’ and, almost with a sense of wonder, conjure their hurt or confused or shocked or resentful younger selves.”
“Sticks and Stones — Defeating the Culture of Bullying and Rediscovering the Power of Character and Empathy” by Emily Bazelon 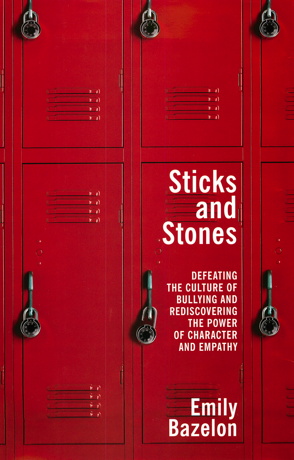 I just finished reading “Sticks and Stones — Defeating the Culture of Bullying and Rediscovering the Power of Character and Empathy” by Emily Bazelon. It’s an interesting perspective on bullying that tries (and IMHO succeeds) in looking at the problem in all its complexity. While it surely was not fun to read — and the quote in the beginning of this posting sums up why — it was an quite enlightening perspective — with perceptive comments and good advice.

I’ve written a bit about “Hostile Environments: School” in “Organizing Creativity” (p. 300f), mostly because I think that some creative children/adolescents might have problems in school and this might help them. I think that bullying (and later: mobbing) is one of the ugliest sides of mankind, that can impede or even kill great ideas — and the people who have them (not that bullying usually kills, I agree that it can be this devastating if you are vulnerable, at the time or in general, but I also think that some creative people are especially vulnerable to bullying and (later) mobbing).

But there is also a personal side: While I can (cognitively) understand that children and adolescents might not be fully responsible for it (due to their cognitive development and being influenced by the environment they are in), it’s another matter with adults. Being the victim of violence during a class trip and a teacher not intervening or assisting afterwards (but only trying to save his skin), or a well-educated PhD student (and later PhD) mobbing via cowardly (and stupidly) ordering things over the Internet on my name to my work address — that’s hard to forgive or to forget. (Close second are only those who stand by the mobbing asshole, because, quote, “He’s nice to me.” — or for whatever other reason. I regard it as a character flaw of the worst kind, capable of rendering an otherwise brilliant and dazzling personality utterly worthless, but I digress.)

So, while only slightly related to organizing creativity, I consider it important enough to include it here: A really interesting and insightful book that is highly recommended:

BTW, other interesting (related) texts/books are:

BTW, if you haven’t seen it, the “It get’s better” project is also interesting — no matter whether you are LGBT or not. And it does get better — for example, I learned how to cope with mobbing, collected evidence and made sure the superior of that PhD student did know about it, which essentially solved the problem. It did not remove that asshole from my life completely and I am still paying a high social price for it, because it made it impossible for me to build relationships with his close friends (or partner, or whatever this otherwise interesting person is), but still. It does get better, because you get better: In dealing with it, in fighting back — the right way.