“I love deadlines. I like the whooshing sound as they fly by.”
Douglas Adams

I had a hard deadline in the past week — one of those you cannot dodge. For a presentation I needed a working version of a critical thinking tool on an iPod touch/iPhone for a museum exhibition. I already had programmed a working version — so far so good — but I needed to fill it with exhibition information and a case story to train critical thinking with. Problem was, I hadn’t either of those and only a day left.

What I am always remembered of in these situations is a comment about Pratchett’s Rincewind — something like that he always survives because he refuses to believe that his continued survival against impossible odds is anything but coincidence, and if he would ever think otherwise, the world would flatten him in an instant.

So, I guess it was coincidence that I had a day where nothing else was important and where I made the right amount of pauses so that I was working at peak efficiency. But it was also something else — the way of structuring the work, which isn’t new but which might be neglected.

I worked in phases, meaning that after a small test whether it worked, I rapidly did the same action for all other instances. For example, when it came to writing the case story I first wrote a draft, the wrote the paragraph containing the information units in the different parts of the story, then I copied it into the database. Working in phases instead of writing the first paragraph, then the information units for this paragraph, then copying it into the database not only reduced the amount of interruptions of one kind of work, but it also made sure that I would have to repeat the same thing again and again immediately one after the other, which helps you speed up things. You don’t have to think, you just do it as fast as you can. 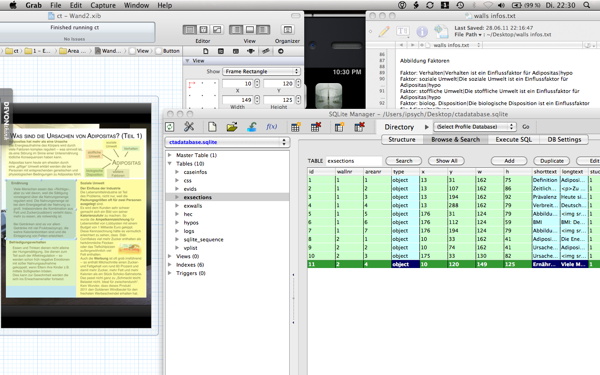 Of course, I had tested the concept first to ensure that filling the database with the information would work and I was reasonably sure that I could finish on time. After all, if you miss out the last step, you have nothing to show for. In comparison to following one process to the end, you do not even half a half-stocked database, you have simply nothing in it.