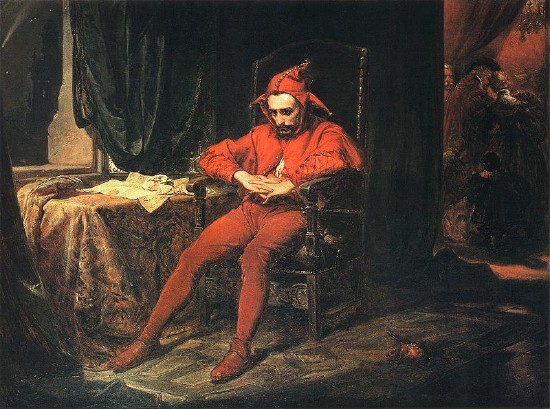 Stańczyk by Jan Matejko (from Wikipedia.org)

Given today’s behavior of some politicians and king-like businessmen (and women), I desperately wish we still had court jesters as feedback system.

I don’t mean the press in general, or even satire magazines or TV shows. They are too distant from the person in power and can too easily be ignored. They entertain the masses (and make life under some politicians bearable, e.g., they also prevent revolutions), but they do not give open, impartial, and honest feedback to persons in power that this person can also accept.

In earlier times, there were persons who could do this — who were close to the king, trusted, honest, outside the hierarchy (i.e., impartial), and who knew the king and how to make him think when his immense power distanced him too much from reality. Who prevents that powerful people stop even considering that they might be wrong. Frank Herbert brought it to the point with his quote:

“Power tends to isolate those who hold too much of it. Eventually, they lose touch with reality … and fall.”
“Dune Messiah” by Frank Herbert

Court Jesters could be instrumental in preventing this — and it must be prevented, because the unchecked rule of a disconnected ruler and his fall usually brings a lot of chaos and destruction to the people. They damage a lot of lives — in earlier times often physically, today the damage is often to the psyche or the career.

I can only hope that at least some people, who have unchecked power in one area of life, cultivate a person with similar qualities to stay connected to reality. And I wonder what the modern day equivalent of such a Court Jester could look like.