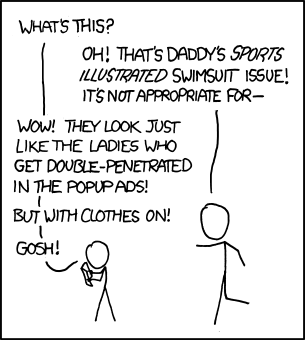 One common ‘argument’ for censorship is that “the protection of our children must have no limits“.

I absolutely disagree with that position.

Limits are necessary in any area, because behind these borders there is room for something else. Arguing that everything is permitted as long as it protects children leads to a kind of oppressive regime that treats adults like children and prevents children from becoming responsible adults.

Parents who challenge their children, trust them and successively give them more responsibility as they grow more competent (not necessarily linked to age) will not need government meddling in the form of censorship. Parents who don’t care about their children will not stop their children from bypassing those measures. Those who would need a guiding hand will be unaffected by it.

It is also not a good idea to try to hide things from children — one of the best examples are the infamous “abstinence only” programs in the USA. Children do it anyway, but without knowledge about protection against HIV/AIDS or unwanted pregnancy.

Sure, politicians and outraged parents can try to sanitize or sterilize the world, especially the virtual world. It will be a dull world, full of self-restraint never to collide with things you must not do. Full of things you must not say, not even think. The peace of a graveyard, where creativity is buried because it is too controversial. It’s easy to achieve — we can try to hide anything not suitable for minors, like China does it with political information. But this will only lead to an underground where this information is distributed (as in China). And no, the world does not becomes safer just because ‘at least ‘crime’ is illegal — yeah!’. And one would raise the question whether the goal of these censorship measures is to protect the children or the government.

Hiding controversial information behind a veil does not remove the controversy. It might lead to an illusion of social peace, but below this harmonious skin tumors are spreading — until the whole body dies. Controversies must be discussed in the open, bad ideas must be beaten publicly by good ideas, and criminal material like child pornography must be removed and the culprits must be persecuted.

We should not hide from reality, nor should it be hidden from us. We should deal openly with it — and learn from it.

P.S.: One ad hominem argument against my position would be that I do not have children and are thus not qualified to judge on this matter. I disagree, not only because it is an ad hominem argument. Judges need to be impartial, one reason why we have them (and juries) instead of judge lynch who would be cheaper and quicker. And I think that especially when it comes to ‘protection of minors’ too many positions are ‘based’ on ideology and emotional outrage — and that’s a very bad way to determine policy.