Did you ever had ideas that you would not want to see realize? Not even in another way, e.g., an idea for a terrorist attack that is realized in a gripping story?

What do you do with these ideas? Do you simply discard them, taken aback by your gruesome fantasy? Or do you actively try to prevent others from realizing them?

There was a story a while ago about a well-known author who had the idea of using planes as weapons (because in essence they are similar to rockets — they fly and they have a high payload). However, this idea was regarded as too far-fetched for a story, so he dropped it. That was before 9/11. The question is, would it have been different if that story would have been published? Would the security on planes have been increased based on a story? Like “yeah, it’s a story, but he’s right, that would be a way to commit a terrible act of terror, and we should do something to prevent it” — or would it have been regarded as fiction, because no-one would willingly crash with a plane into a building?

While this is an extreme example, what about smaller ones? Like using an modified AR Drone to smuggle drugs or weapons into a prison? Currently these drones have only a flight-time of 15 minutes, but let’s think about a modified or future version that can carry a payload (e.g., a package of heroin or a gun). It is relatively silent, very maneuverable, could ascent and descent vertically to “jump over” the watchtowers or sneak close to the ground and the walls — and with a camera it could easily find the right window or drop the payload somewhere on the grounds where the recipient might find it. Think of IR vision and an IR marker at the right cell window. If the range of the control signal is too short, other drones could be used to carry small receiver/transmitter. They would essentially build a chain of wireless frequency connected “Morse stations” where the signal is received and transmitted again. 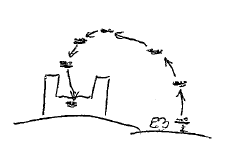 I think it is (or soon will be) feasible. And I think it will work — no helicopter, no zeppelin, no bribed guards — just a silent drone that descents silently in the night. Unless prisons watch the airspace like a dome (and not only the walls) the drone could slip through — it flies to high and descents vertically for conventionally placed cameras to catch. But then again, I do know almost nothing about prison security and they might have already foreseen this strategy.

But I think, the question remains — what would and what do you do with such an idea?