A few days ago I had an interesting conversation with a young woman. She had just bought an apartment and mentioned that she would have to reduce her spending to save the money she needed each month to pay the credit. She complained that today’s society is too consumption-oriented, with advertisements and suggestive “buy now, pay later” “offerings” at any corner.

On the one hand, I agree, at least, that this is a problem. This lifestyle costs a lot of money which in itself is bad enough. But the additional demands of the goods we buy make it worse. We want (or feel that we ought) to use the things that we have. And even if we do not use them, they take up time and space as we build our lives around them.

These “goods” cost attention, which is the most precious “good” any person has. Even when we decide not to use them we spend attention on them which accumulates to enormous amounts over time. In our daily lives, these goods compete with other, perhaps more important, goods, for the little attention time we can spare. Time we could spend to become proficient in our jobs, to become more than rank amateurs in our hobbies, to learn all about the things we are interested in, to have memorable experiences with people we love. And even in a world with advertisement at every corner, we still have a personal choice. We can live more simple, more ascetic.

The thought that we could do better without some “goods” is not new, nor was it forgotten. Henry David Thoreau wrote: “As you simplify your life, the laws of the universe will be simpler; solitude will not be solitude, poverty will not be poverty, nor weakness weakness.” and some books that became bestsellers in the last years advocated simple living. Doing without has even its voice in popular culture, from “The things you own end up owning you. It’s only after you lose everything that you’re free to do anything.” in “Fight Club” to “Too many material possessions and they start to own you — I like to live light.” in a “Chastity” comic. Even a typical Star Trek episode can serve as an inspiration and reminder for simple living. Be it a lack of props, the necessity of living on-board a vessel, a society without money (and consequently without advertisement), or the benefits of future technology, but the personal quarters are usually sparse and it is rare that a transfer arrives or leaves with more than one bag.

Given all these reminders, what is the problem?

Even voices for simplicity have to get our attention, be heard over a chorus of strong and professional carnival barkers. Every book about simple living has to fight against hundreds of thousands of other books, during a time when each page read is a victory against distractions. Consequently, this text might serve as a little reminder rather than as a new revelation.

So, how is simple living possible? Unfortunately, there is no simple answer for that. Human beings are not simple, or rather, they are not the same. With different needs, hobbies and jobs come different demands for simplicity. Amateur goldsmiths and sculptors have more problems to remove the “clutter” from their life than writers or digital painters. The amount and importance of “personal items” varies tremendously, as do individual capabilities and possibilities.
It is also is important to note that ascesis is not something one ‘achieves’. It is something one can strive for, but life is not static, nor are ones possessions. Needs and possessions change over time, even within an hour or a day. Things always come in and accumulate. Even without buying anything, there are things one finds or is given, be it as gifts or as advertisement. While one can have a momentary victory, the next ring of the doorbell can bring new unnecessary goods. And it is not only the input itself, which can be beneficial, it is also the goods we own that change over time: Things break down and have to be replaced or discarded, and our interests shift but our possessions do not. We often keep things long after they have outlived their usefulness. When they do not aid us in our lives but encumber us, change from good to superfluous, from servant to master, from healer to torturer.

To strive for ascesis one has to fight two battles at once: continuously watch the input and continuously reduce the possessions down to the essentials. 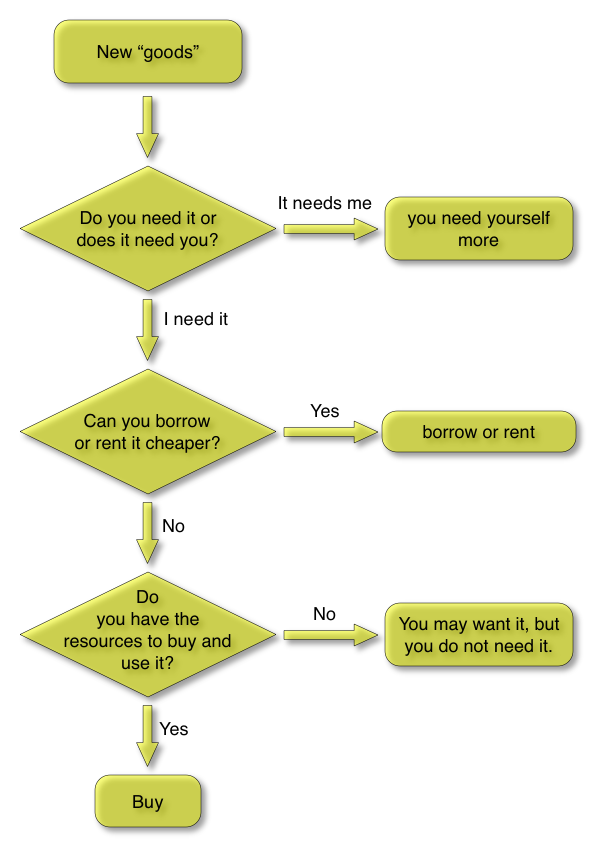 We can get many things during the day we do not need, on the contrary, the things need us. While we might feel an overwhelming attraction, it is only a very strong pull originating in the object but no push to it from ourselves. The advertisement wants us to buy, but our own desire is not strong enough that we would keep this want for more than a few seconds. No wonder some people buy only the things that they have noted at home on their shopping list. Everything else they might “want” to buy has to wait until the next scheduled shopping trip, if they remember to write it on the list before they leave the house. And given that most goods need strong advertisement to appear attractive like a medieval whore needs a dark side alley for the same aim, this is a big “if”.
Other things we need we do not need to buy. It might be nice to own something, but for a lot of things it has more disadvantages than advantages: it costs more, you need space, you need to maintain it (at least: dust it), and in the end you either sell it for less than its worth (with extremely rare exceptions) or you (or your heirs) throw it away. A lot of things that we carry over our doorsteps will only be used once anyway — for example books and videos. So why carry them at all? Why buy books and videos if you can rent them? Why paper and discs when you can use digital?
See the figure on the right (click to enlarge) for an illustration.

Reduce to the essentials 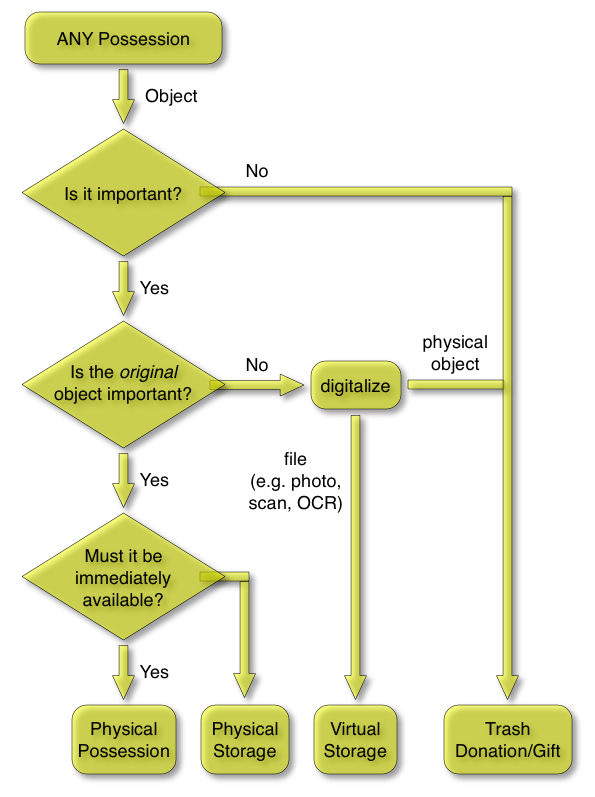 Given that most people already have more goods than are good for them and things change in usefulness over time, either by themselves or by changes in the interests, properties and capabilities of the owner, you have to reduce your goods to the essentials.
The way is physically simple but psychologically hard: For each possession, decide whether it is important or not. If it is, is it the original object that is important? If not, it can be digitalized and reduced to a virtual possession. Obsolete physical objects become gifts, donations, or trash. What is dead weight for you might be useful for someone else. If the original object is important for your stability (e.g. heirloom, remembrance object, important documents), must it also be accessible 24/7? If not, it can be put in a physical storage, either ones own private storage room or at a commercial storage provider (for documents a bank if often sufficient). Only if an original object is important and must be available it should be part of the physical possession.
See the figure on the right (click to enlarge) for an illustration.

There are also some things to condense your possessions more efficiently:

Try to reduce your possessions to a few high-quality items that can be used for multiple purposes. While high-quality often (but not always!) means high price, high quality items usually last longer and cost less in the long run. You usually pay the price, one way or the other. If you save money for nutrition or sporting equipment, you are likely to pay with your medical bills. If you buy low-grade products you have to replace them more often and they produce inferior results. High quality is hard to find since it has become more popular to invest in louder advertising than in better products, but it is really worth it.
Unfortunately, high quality is often inversely related to multi-purpose. Specialized equipment is often of very high quality (given that it is usually used by experts), but often there are also good “Jack of All Trades” goods. The prototype is probably the Swiss Army Knife which is still extremely useful. Modern cellphones become the Swiss Army Knives of personal communication and information, merging telephone with personal computer. And computers itself can still be used for so many functions that a single computer can be used as photo laboratory, canvas, music studio, typewriter, entertainment center, library, and much more.

Digital media is not only impressive through the width of its uses but also through the miniature size it occupies. The physical space can be enlarged a hundred thousand fold into the virtual space. A whole library occupying a vast building can be stored on a single hard disc drive that can easily be carried around. While digital has its risks, predominantly of a total loss due to hard disc failure or accident, its advantages are overpowering. Make sure to keep multiple backups on multiple sites (e.g. at home, at a storage box in the bank, on a server farm in Norway [see here, here, and here]) and be careful with encryption.

Even if you want to keep things due to their personal or monetary value, there is often no need to keep them around every day. They just collect dust and cost space, time, and attention. While we can’t all store our unused stuff at our parents house, there are commercial providers of storage space. It is out of sight and you notice what it costs you every year when you pay the bill, making it more likely that you discard it entirely.

While living ascetically has its advantages, be careful not to overshoot. I never understood why one would willingly live on top of a mountain or in the woods, unless it’s in a modern day Xanadu or a nice Dacha. Living ascetically should allow you to live more streamlined in our modern civilization (is there any other kind?) to reach the goals you set for yourself. Living ascetically is a way to fight against entropy by freeing oneself from all the encumbering stuff that prevents one from creating and producing, from becoming better in the things one really loves. You should never sacrifice your dreams on the altar of efficiency nor deprive yourself of your securities, be they emotional, financial, domestic or nutritional.

In short: listen to yourself in trying to find out what you want, watch your input and regularly check your possessions — you might not need all the things that burden your daily life.