She hadn’t seen the Death of Rats lately. It was too much to hope that he was dead. In any case, it hadn’t slowed him down so far. That made her think wistfully about the contents of her desk. Susan was very strict about eating in class and took the view that, if there were rules, then they applied to everyone, even her. Otherwise they were merely tyranny. But maybe rules were there to make you think before you broke them.
“Thief of Time” by Terry Pratchett

About a year ago I’ve build a standing desk and have been using it since. However, within that year, a few things changed. You can see the original setup (with explanations) in this posting. It looks like this: 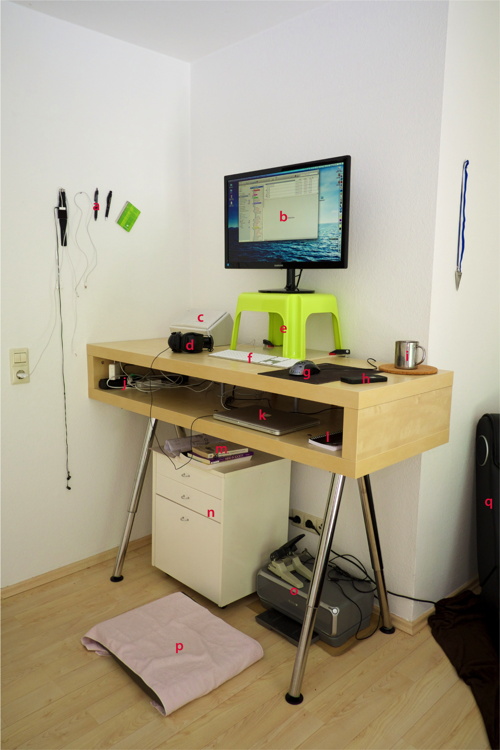 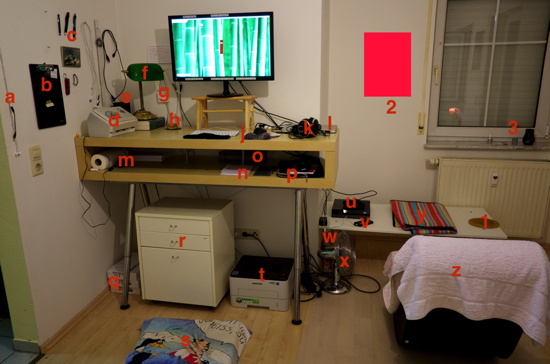 Given that the right side is somewhat obscured, here’s another picture: 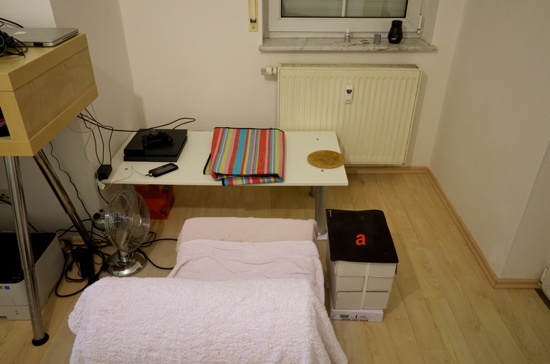 a) A box of white copy paper with a mouse mat.

Actually, not so much. I changed the printer, found a better way to raise the monitor, got the cables in order, changed the mouse mat, added more nails to hang things I need in arms reach.

But the greatest difference is that I now also have a place to sit and work. I can easily move the monitor from the standing desk to the low desk on the right side.

The desk on the right side is actually just the table top that came with the (now) standing desk legs combined with some legs I had from another piece of furniture (surprising what power-tools can do).

Why again something to sit and work? Actually, it’s more about sit and play. I sometimes get lost in games. I play little, but a few games manage to capture my attention for a long time. Games like “Neverwinter Nights”, “Neverwinter Nights 2”, and “X-Com” had me playing for 24+ hours … without breaks (well, bathroom breaks obviously, although you can get used to the stinging pain in your bladder 😉 ).

This became an issue when I tried out “Witcher 3” and played it for over 24 hours — and that’s the conservative estimate. More likely 36-48 hours. Immersion and flow are extremely powerful.

The problem? After standing for over 24 hours I suddenly noticed that my ankles were swollen … a lot. So, I thought it … healthy to have another way to play. BTW, I love playing PS4 games standing — it’s a different experience. But it becomes a problem when you play for a long, long time.

So, now I can simply move the display (with the footstool below it) if I want to play games. The cables are long enough — which is also a reason the notebook now is on the right side of the desk.

Post Navigation
next older posting: Loopholes
next newer posting: A look at a really good game: “The Witcher 3”