The Bible tells us to love our neighbors, and also to love our enemies; probably because generally they are the same people.
G.K. Chesterton

Given the 2nd floor office is just a (quarter of a) stone throw away from a residential building, I work mostly with the blinds drawn. Only exception is during strong wind, when the blinds are raised automatically to protect them. Nothing against the people living in the next building, but I don’t like to be watched. Or watch older guys sitting with a pyjama on a balcony.

I thought about a few other solutions (stones would come in handy in more ways than one), but giving that I do not own the building, nor am in a position of authority of the decisions, and there are other people working in the same office, my options are limited. However, there is one idea I think has a lot of potential: foil to turn windows into something that looks akin to stained glass.

After all, foil is frequently used to let in the light, but prevent others from looking in. But it’s usually white foil, perhaps a bit off-white, nothing else. And it makes sense — especially if you work with colors the last thing you want is working under colored light. 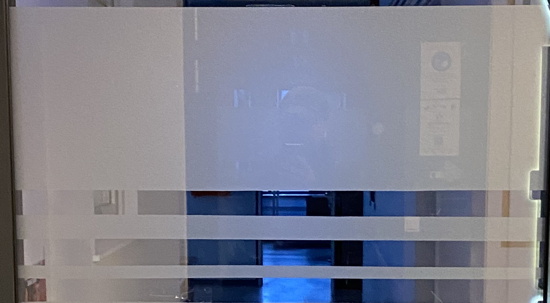 But for a normal office — hey, perhaps printing a window foil with some stained glass images might work. I haven’t tested it out, but it could work. Just use one of these removable window foil shops, get an image (either created by yourself or a photo of an existing stained glass window) and have it printed on the foil.

The result should be a window foil that turns an ordinary window into something that lets in the light and looks quite nice.

Hmm, I hope I have the opportunity to try it out sometime. Hmm, perhaps with the windows at home. Hmmm.