Censorship reflects a society’s lack of confidence in itself.
Potter Stewart

The nice thing about censorship is that badly executed, i.e., if it is not done a way nobody knows censorship happens, it can alert people to interesting bits of information (Streisand Effect, i.e., attempt to hide it leads to wider spread).

Recently I heard that clips from an episode of The Joe Rogan Experience were removed from YouTube, and after looking for these clips, well, who would have known, there are channels on BitChute mirroring banned YouTube videos, including the whole episode from which the clip was from (the recording has a gap, during which no information was lost, but this one here seems to be without this gap). 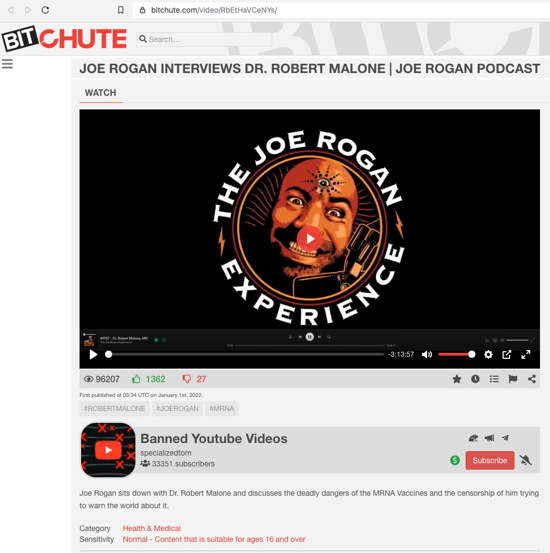 And that’s the ray of hope — while YouTube, Twitter and Facebook seems to have fallen prey to so-called fact checkers (financed by whom?), other platforms have room to grow. For video, there is the aforementioned BitChute and Rumble, for «tweeting», there is Gab or Gettr, and there is locals for community building, and there are many more … the world is much, much bigger than YouTube, Twitter and Facebook.

BTW, one quick check whether the platform is free — if I see content I find disgusting, I know that free speech is at least somewhat intact.