«He’s no flatterer,» said Ela. «He doesn’t tell us what we want. He tells us what we know is true. He didn’t win our affection, Mother, he won our trust.»
«Speaker for the Dead» by Orson Scott Card

After my father died about two months ago, my family and I had to write an obituary. And I found out how badly designed many aspects of the funeral business are. A week or so ago, my mother asked me to write/design the thank you notice for the many condolence letters/cards we had gotten.

She did send me a few examples, and … well, at least there is consistency with the obituaries. And within the thank you letters — text, graphics, layout — there’s a frightening consistency there as well.

Admittedly, I’m not a designer (and I fucked up the line spacing), but I (mostly) like my version of the thank you notice: 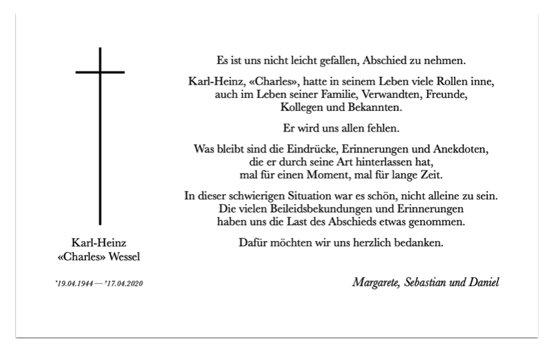 Very rough translation (it’s late and it was a long day): It wasn’t easy for us to day good-bye. Karl-Heinz, “Charles”, had lots of roles in his life, and in the lives of his family, relatives, friends, colleagues and acquaintances. He will be missed by us all. What remains are the impressions, memories and anecdotes, which he left behind due his manner, sometimes for a moment, sometimes for a long time. In this difficult situation it was good not to be alone. The many condolence letters and memories have relieved our burden of having to say good-bye somewhat. We would like to give sincere thanks for the support.

And yeah, it probably applies to other people as well — a bit of a Barnum Text thank you message — but the “impressions, memories and anecdotes” part that forges the link to his person.

But yeah, I also wonder why many of them are so baldy designed. In part it might be due to grief, and in part likely due to lack of skills. However, the condolence messages do give you an impression what other people remember about the deceased. And combined with what you remember — there should be enough material for a good message.

After all, a good condolence Letter:

Writing Condolence Letters
Mention something in the letter that is meaningful about the person who has died. It can be a memory or just something you particularly liked about the person. Those left behind feel pain whether you write or not. Open yourself to those in grief and don’t be afraid to say what you really feel, even if it’s to tell them, «I’m so sorry. I don’t know what to say, but I’m here for you.» There is beauty in the honest confrontation of death and grief and only more hurt in the awkward avoidance of bringing it into the light.
Apparently from an Emily Post book

Hmm, all in all, an interesting experience that’s still ongoing.