What is hidden in an empty box?
Unknown

I recently bought a Japanese Puzzle Box. And yeah, the Manufactum version is probably pretty basic, but I love the idea of having something that is beautifully constructed and that can only be opened by solving a puzzle (or by using power tools). 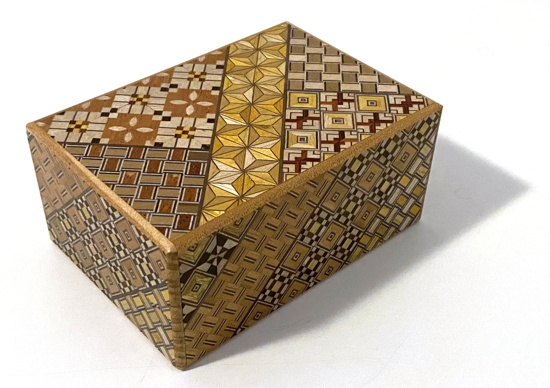 Until I tried to open it.

It took me a long time (about 10 minutes) just finding the right place of the first part that can be pushed. It’s very hard if you do not know how much pressure you can apply to the box.

Granted, I felt pretty grand when part of it finally moved, but then it got stuck again.

And had a look at the solution.

Looking back, it turns out that my problem was thinking I could only use a specific mechanism once. It was a classic case of a faulty assumption that prevented me from solving the puzzle.

If I had taken a break, tried it again later, when I wasn’t invested in not moving a part I had moved before, I might have solved it. But, I guess I was too impatient.

But yeah, these boxes are cool. I only wished they would involve more elaborate constructions. I was looking to push down specific plates. The thought of using the sides only did not occur to me.

(And no, I’m not showing the open version. If I had remembered the Manufactum image, it would have been easy. And yeah, it’s a very small box, but that’s a feature, not a bug.)

Update: Well, this answers the question what else it out there … waow.