“After fighting, everything else in your life has got the volume turned down.”
Narrator in “Fight Club” (1999)

A couple of months after New Year, many resolutions are usually quietly forgotten. I have already written a posting why I think that resolutions should be made after the new work year has begun, not on New Year’s eve.

Anyway, I had a resolution for this year: Taking part and (hopefully) finishing the Braveheart Battle.

The Braveheart Battle is a 26km (16 miles) “cross-country” run, if that country includes rivers and man-made obstacles. The run was created by an ex-soldier and, yup, it reminded me a bit of my compulsory military service. Esp. about the story of a solder who, after reaching a hill, screamed:

“So viel Dummfick wie ich brauche könnt ihr mir gar nicht geben.”
[literally: “You can’t give me the amount of dumb-fuck that I need.”]

It’s hard to translate, German being the language of Goethe and all … let’s just say he was a glutton for punishment.

In total, 2883 runners did start, of which 2797 did finish the run (97%). I guess the low number of those who did not finish was due to the warm weather. It was about 15°C, which was nice, giving that swimming was involved. Swimming in jogging clothes and while wearing jogging shoes. Still, the water itself was quite cold — and I hate cold water. 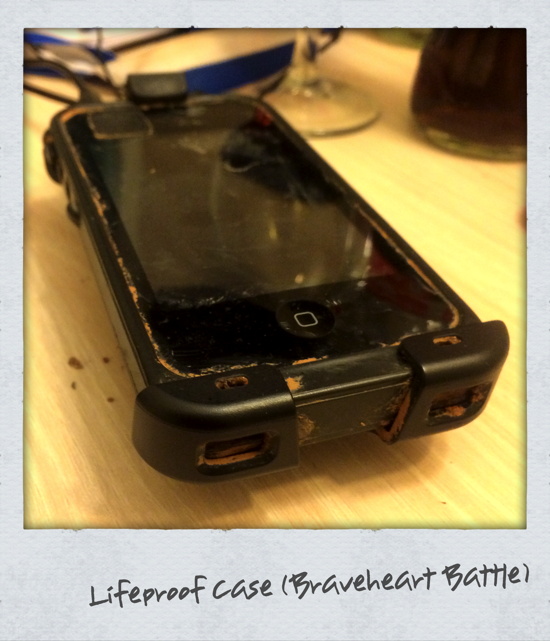 Despite my mediocre training, I did this run with my iPhone 4 in a Lifeproof(R) case attached to my waist. The case took quite a beating  — swimming, mud holes, containers, and much more — but the iPhone still works. The reason why I wanted to do this run with my (old) iPhone was the “Zombies, Run!” app. It’s an exergame that makes your actual, physical running part of a story.

The fun thing about the “Zombies, Run!” app is not only its very good story, but also its GPS tracking. I could not listen to the story during the run, as there was just too much coordination with others involved. There are obstacles you cannot overcome on your own — e.g., getting out of a mud hole that is about 2,5m deep. And even the “easier” obstacles require you to know what others are doing. Running with earphones — not recommended. So I just put the water-proof earphones below my shirt. The app still did produce the GPS map:

It’s nice to use their website to check the map and how long specific parts took (here screen-captured as video):

As you can see, we waited for a long time until we could start. The official start was at 11 a.m., but it took about 30-40 minutes until our section could finally start. And we immediately ran into a queue at the second or third obstacle.

Anyway, it was fun. I tried to conserve my endurance as much as I could, reminded myself to concentrate on putting one foot after the other, and otherwise just enjoyed the experience.

And I did finish the run.

It took me 4 hours and 34 minutes and 8 seconds, but I managed to cross the finish line. 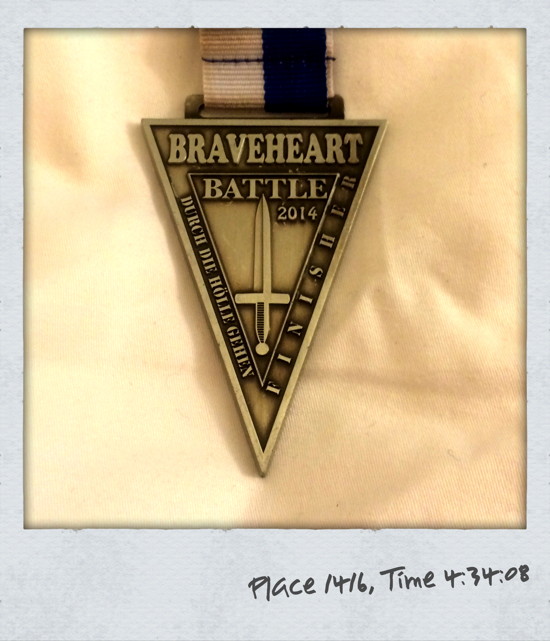 It was an interesting experience. It was like being a kid again and running through the woods over obstacles and the like. On the downside, my knees took quite a beating, and there are parts of my body that look like someone took a cane to it … but anyway.

It was fun and I did fulfill my resolution for this year. Hmm, reminds me a bit of this quotation here:

“There were times … I thought none of us would get out alive. Some of us didn’t. But, we did everything we said we were gonna do and nobody can take that away from us, or this place.”
Zack to Sheridan in Babylon 5: “Sleeping in Light”

Now I need a new resolution for this year …