CHAPTER ONE — THE BOY WHO LIVED
Mr. and Mrs. Dursley, of number four, Privet Drive, were proud to say that they were perfectly normal, thank you very much. They were the last people you’d expect to be involved in anything strange or mysterious, because they just didn’t hold with such nonsense. Mr. Dursley was the director of a firm called Grunnings, which made drills. He was a big, beefy man with hardly any neck, although he did have a very large mustache. Mrs. Dursley was thin and blonde and had nearly twice the usual amount of neck, which came in very useful as she spent so much of her time craning over garden fences, spying on the neighbors. The Dursleys had a small son called Dudley and in their opinion there was no finer boy anywhere. The Dursleys had everything they wanted, but they also had a secret, …
The beginning of “Harry Potter and the Harry Potter and the Philosopher’s Stone” by J. K. Rowling 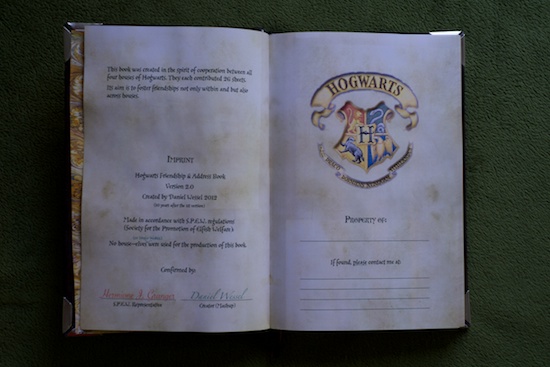 A couple of years ago I created a “friendship book” in the style of the Harry Potter series. Yup, I love ‘Harry Potter’, at least the first few books, and I thought: “Let’s ignore all the crappy merchandising stuff, how would a ‘friendship book’ look like?” Given that I had an Hewlett-Packard print studio CD (came with the ink cartridges of my Inkjet printer) with some nice house and Hogwarts logos, I went to work.

I went for a self-bound book — something that the students might have used. But I was not satisfied with it. The cover was clad in velvet and while velvet is nice, I thought that leather might be more suiting. But leather is expensive, especially high quality leather, nothing I could afford while being a student with no real income (despite working 19 hours a week in addition to full-time studying).

So I created a few books with a velvet cover (bound them myself), but the idea stayed in my mind and nagged me — leather would have been nice. It staying in my head until a few weeks ago when I thought: “Hey, I’ve got a job (for the moment) that pays a decent wage (for the moment), why not order some nice leather and recreate the address book?”

So I did. I ordered some nice leather from “Lederkram.de” (a German shop that caters mostly to the LARP community, go to “Felle, Leder & Bänder”, “Leder”, “für”, “…nach Art”, “Velourleder”, then search for “Velourleder VB01”, look for “Bucheinbände” (= book covers)). And the leather really was nice — I bound a new version of the address book in leather (printed by Lulu in color hardcover, still using the same images from the old image CD that came with the ink cartridges of my HP printer).

You can see some images of the address book in this gallery:

The nice thing is that it always pays to have an archive of your creative works — with the files you used for your works. You never know when you have more options and want to reuse some images for a new or improved work.

Personally, I think while the leather looks more … authentic, the velvet was nicer to touch, though. Still, the real leather is a vast improvement to my previous works with ‘synthetic leather’ in other projects. Synthetic leather just feels … cheap, like poisonous chemicals … but real leather … it’s something different. Still, I’m not sure, I like leather in other contexts, but for book covers perhaps I stick with velvet …

Still, it was worthwhile to try it out … and it is an improvement to the prior version of my address book.