When I conducted my first study with mobile devices I had this idea that the best place to keep the PDA would be to have it strapped to the wrist. Kinda like an oversized wristwatch — or like the computer in BAT II or some other SciFi games or movies (Final Fantasy, Mass Effect, etc.).

It didn’t really work. While it was no (big) problem to sew an armholder, the first two test participants showed quickly that a wrist is useful for quickly looking at the time, but not for reading longer texts: It’s not possible to keep the arm up for longer periods of time.

So the armholder vanished in one of my drawers, but I still think that it might be a useful idea. Now that I have an iPhone 4, I wanted to try it again. I often make notes in Momento (more on that in a later posting) and use Things to organize my tasks, so I use the iPhone quite often (but not to make calls, that function is buried in a folder somewhere). To avoid starting from scratch (again), I ordered a case that is usually used to strap the iPhone to the upper arm during sports and changed it to fit my wrist. This meant cutting off about a third of the length of the band (it would have fit the upper arms of Schwarzenegger in his Predator days), removing on part of the Velco and exchanging it for the other element, and closing the end of the band (you see it in the first photo on the right).

I’m curious how it will work out — it should work, but the participants have taught me that should and does can be rather … separate things. 😉

The armholder cut down to fit my wrists. I replaced one of the Velcro straps with the opposite element (originally there was only one vertical bar at the right side, now it’s the large horizontal bar on the right side) and closed the cut (right border). The sewing is amateur level, but until I find out whether it works or not it does not make sense to pay a seamstress to do a better job.

The sketch I made prior to the cutting and sewing. It shows that a large part of the band was cut off and that one of the Velcro parts (“-” on the left) had to be exchanged to its opposite. 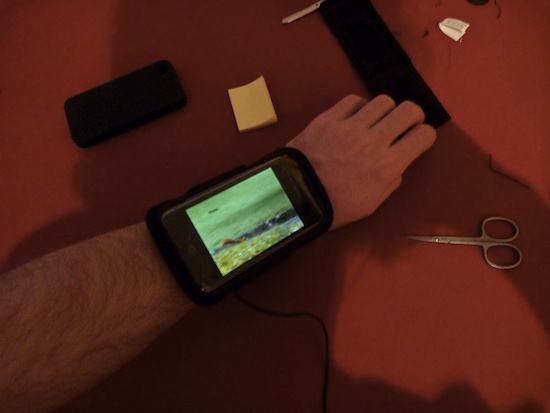 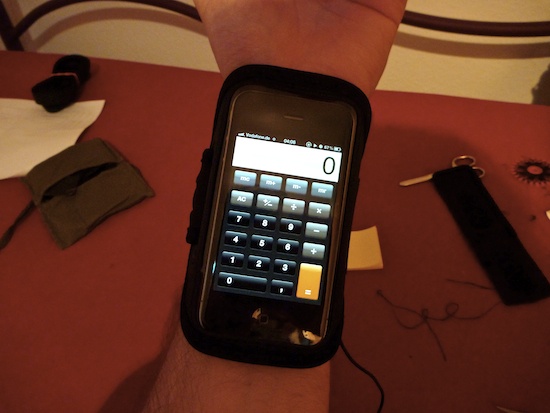 … where it can show the portrait mode. Should also be easier for typing.