“No trouble, I’m going to have tea anyway. 4:40’s tea time.” As though by magic the door opened and a liveried houseboy brought in a silver tray with tea for two — with thin buttered toast and hot scones in a silver warmer. The man poured and left. The tea was dark brown and strong. “It’s Darjeeling, one of our House blends. We’ve been trading it since 1830,” he said sipping it gratefully, as always thanking the unknown genius Englishman who had invented afternoon tea, which, somehow, always seemed to settle the cares of the day and put the world into perspective. “I hope you like it.”
Noble House

Given that the stress level at work increased recently, I started to try out tea breaks. Yes, I actually introduced a time where I made a break in order to deal with the high workload.

I found these breaks to be hard to introduce but basically very helpful. At 16:30 I make myself a cup of tea and sit down, not in front of the computer but at another place in my office, thinking about the day so far and what I can do with the rest of the day. I found that it did energize me for the next few hours and I often got a few good ideas. I still keep something to write handy for that reason, but I also keep it out of sight because this tea break is meant to be a break. But if it is interrupted by an idea, I can capture it.

Essentially I think these kinds of tea breaks are a good idea, kinda like all smoke breaks a person takes during the day rolled into one, without the health impairment. 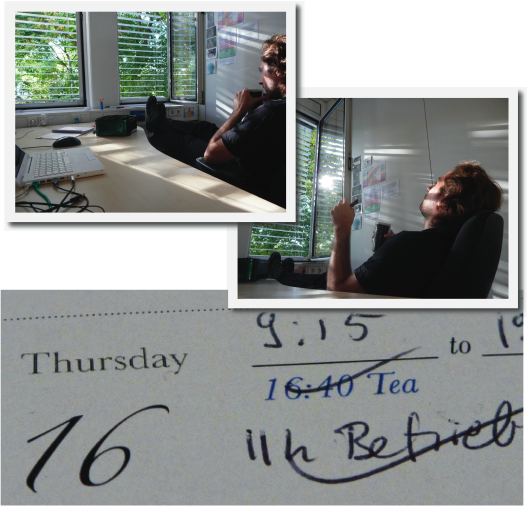