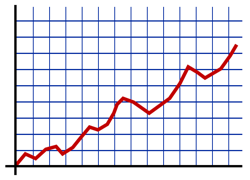 Suppose you’ve just done a great work. Not any great work, but the best work you have done so far. A story written, a song composed, a performance … performed … so beautifully and well that you are in awe of yourself.

Then you try to repeat it and in almost all cases, you repeat it, but not as well.

Did you achieve your pinnacle? Is there no improvement possible through training? Unlikely.

In many cases it’s just an effect called “regression to the middle”. It’s common a lot of areas, take airplane landings for example. A pilot has just made a perfect landing — easy, smooth, controlled. Another pilot has just made a landing that was just an inch short of a crash. Suppose both pilots land again, what will happen? It’s extremely unlikely that the perfect landing pilot will achieve another perfect landing. There are hundreds of factors that influence a landing and they were all perfect during his first landing. Chances are that during his next landing, some tiny factors not be perfect, meaning that his whole landing will be worse. Perhaps only a little, but it will be worse. The near-crash pilot however will face the same. Given pilot training many things must have gone wrong (weather, information, plane, his concentration, etc.) during his first landing. Chances are, during his next landing at least some are improved. Note that this effect happens independent of the ability of the pilots. Given the same pilots but with severely different conditions, this effect would still happen (circumstances change).

So, if you just did a masterpiece, chances are that all the factors that were perfect during this task will not all be perfect during the next time you do it. Perhaps you’ve used up your best ideas (for the moment), and you just need a longer absolute refractory period. Perhaps your anxious whether you can perform the same feat again (distracting you and leading to less than perfect concentration). Perhaps you are tired because as much as you were in a state of flow, that perfect feat took a lot of energy. Perhaps you are disturbed by someone or some valuable distraction is missing.

Whatever the case, expect that your performance varies. Training is suppose to make us better over time, our work is supposed to become better over time, and both points are true. But you will improve only over multiple incidents, e.g., over time. Small setback are natural and normal — even large setbacks can occur if you completely change your strategy.

So, focus on the task at hand and if you compare your results, do it over multiple trials.