“This is how I’ve come to be seen by my people. Despite my best efforts, I’ve become an icon. I didn’t understand why or how until I saw this. I realized it’s simpler to make a statue to someone who you believe embodies all your better qualities than it is to actually improve yourself.”
“And this saves you from having to think.”
“Exactly. For the last year, I’ve tried to point my people toward the simple truth that we are one, regardless of race. Somehow, that message has gotten twisted so that I have become their idea of the truth personified. Once you turn into this, you can no longer be who you are. You can only be what they want you to be, what they … expect you to be.”
G’Kar and Garibaldi in Babylon 5: “The Wheel of Fire” 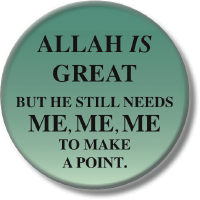 So, Lars Vilks was attacked by some men who claim that “Allah is great” but still needs their fists to make a point. It made me wonder, why are these (few) men so … fanatic?

It’s sad, but I think it would be even more sad if they are successful this way. If creatives silence their voices themselves, discard ideas of a better, more peaceful way to live in fear of retribution. Or if it would dominate the view on Islam — a few men who think that making a scene and hitting a man over sixty is a good idea.

I think that no topic is beyond humor, self-irony and criticism — especially not religious ones. Otherwise, you cannot take a critical distance to it to see it in new ways, to solve issues creatively. And I wonder, how would these fanatics react to a movie like “The Life of Brian“, only with Islam instead of Christianity as the topic? (And, looking back at the history of the movie, it appears that Christians didn’t deal with humor that much better, but at least, not with physical violence.)

Well, if these people have a problem religious satire, that’s their problem. I can only hope that the artists do not censor themselves but deal with this problem in an elegant, creative, and very intelligent way. And I hope that tips for Organizing Creativity will not need an extra section of how to protect yourself from people, who don’t only attack your ideas but yourself. I mean, I already wrote about individual dangers of creativity, but attacking (and in some cases even killing) the messenger … seriously, don’t they have better ideas?

Note: The button is meant to be ironic (the childish “me, me, me” should give it away) … okay, let’s vivisect the frog: Claiming that a God is great and then doing something yourself, because God apparently does not want to smite down the sinner himself, kinda put’s God’s greatness in question. Well, it does, if you think about it. It might be nice to think that an almighty being needs one’s help (wait, wouldn’t that make you mightier than God?) but I think this is highly questionable.

In this context I can highly recommend the following TED Talk by Maz Jobrani: “Did you hear the one about the Iranian-American?”