That some good can be derived from every event is a better proposition than that everything happens for the best, which it assuredly does not.
James K. Feibleman

So, a couple of months ago, my father did suffer a stroke — during an operation on a heart valve. Quite common actually. And given everything that could have happened and everything that did happen, he — and we — were very lucky. As far as we can see, the only things that were really affected were his vision and his left arm (he is right-handed). Personality, intelligence, reasoning — all still in place. While it provided an actual experience with a few psychological phenomena I had read about (while doing my diploma in psychology) — and of which I would have been perfectly fine with the theory alone — given the severity of the incident is does not get much better than this. Although, of course, the timing could have been better.

But it was nice to see how family — when “in face of adversity” — can really pull it together. It’s also nice to see how a person who just had his 70th birthday toughs it out and fights back to beat the limitations imposed on him. “Impressive” is the word I’d use here.

And it was also nice to see that creativity is everywhere — even within one’s own family.

Given the damage to his visual system, my father sees everything a bit off and some things are hard to see for him. He has already learned to compensate for the bias — and this very well — but still. A few centimeters and a fairly large blind spot (that is not realized as blindness, see “neglect“) poses questions: What if he wants to walk by the stairs but accidentally hits the steps? Especially at night, it’s a matter of centimeters when walking to the bathroom.

There are gates to prevent children fall down the stairs, but the one my parents got had a bar near the floor that almost tripped me over when I did visit them. Not a good construction. So my mother got thinking. And together with a craftsman she did do the following construction: 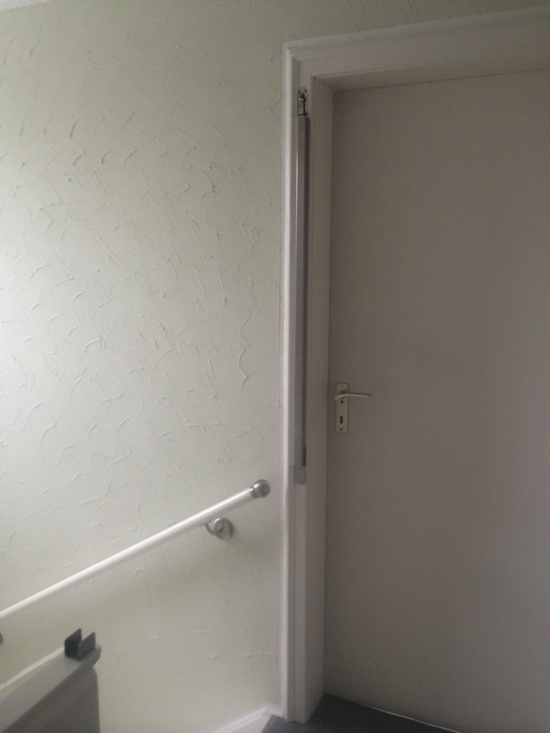 Bar preventing a person who cannot really see faling down a flight of stairs.

A simple bar with a simple joint on the door frame next to the stairs. What is really interesting is the locking mechanism: 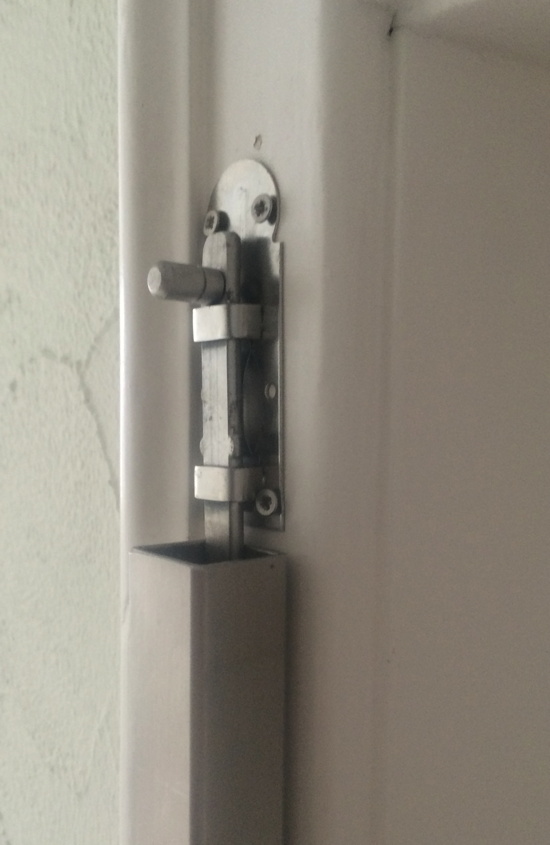 Given that the bar itself is hollow, a simple locking mechanism holds the bar in place.

And frankly, that construction got me thinking. There are a lot of things I absolutely did not adopt from my parents. Belief in a deity for example (mostly got rid of that, thankfully). But other things — yeah. And it’s nice to see that something you care deeply about like creativity was already present in your parents. It provides you with a common outlook. As much as I am different from my parents in many aspects, in others — yup, I did adopt a few things.

And seeing my father handle his stroke … that’s not so bad at all.