“Hokey religions and ancient weapons are no match for a good blaster at your side, kid.”
Han Solo in “Star Wars IV: A New Hope”

I did watch Star Wars “The Force Awakens” on Sunday. (Verdict: okay’ish, but way too similar to “A New Hope” with a Severus Snape knockoff who would have laser-cut his opponent to pieces if she wasn’t a Mary Sue.)

But the thing that struck me — and reminded me of the old movies — was the minimalism (so much for seeing what’s on your mind).

Yes, Star Wars goes for a “used future” style (as George Lucas called it). The ships aren’t sparkly clean as in Star Trek. Things break and get discarded. There is waste and rubbish, but few if any clutter.

And the protagonists do travel with rather light gear. Have a look at the old movies:

Elegant weapon, but have a look at the clothes. Rather simple with a belt that carries some useful stuff.

Even in a merchant ship, there isn’t that much clutter lying around.

One of the scenes with a bit more stuff. Energy for the droid, some food, but hardly any clutter.

Yoda seems to be another minimalist.

The others also go for light gear.

And you see something similar with the new one: 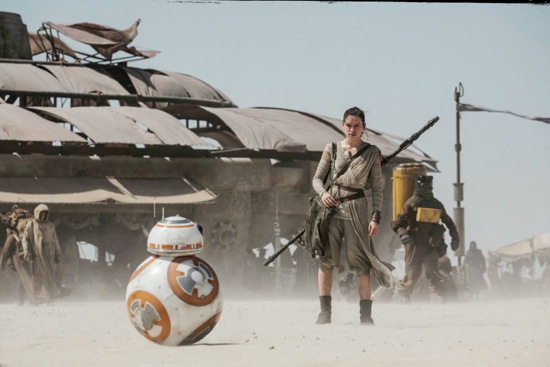 One small belt bag and a staff, but otherwise — simple clothes and not much stuff.

Sure, part of it is the “hunted by the Empire/First Order” issue. Having your home blown up by Imperial Storm Troopers pretty much solves the question of what to pack. Part is living on a third world. Growing food in the desert or scavenging old Imperial Star Destroyers for parts (to trade for food) doesn’t leave you with the resources to accumulate clutter. And yep, part of it is the logic of the story, where people don’t have to brush their teeth, shave, shower, or have other bodily needs. Not to mention changing/washing clothes (or at least underwear and socks).

But looking at the universe — I guess digital storage isn’t a problem so there are no limits for the ability to store digital books, movies, music and the like. Then there are droids who could cover a lot of entertainment and take care of mobile data storage. Just imagine R2D2/BB-8 with a color projector (yep, watching porn would be awkward with a droid present, but computer games would rock, plus you either have a worthy opponent or a loyal team member). In fact, such a mobile personal assistant wouldn’t be too bad. Yep, these droids sure do have their potential.

And yeah, in a way, there is some inspiration in the stories … among others for traveling lightly, owning less, and carrying a light sabre.

And given that two out of three are achievable today that ain’t bad. 😉

(Images from the movies. No copyright infringement intended.)

Categories: General Tips, Improving your Creativity, Infrastructure, Inspiration, Music & other Art, Something to Think About

Post Navigation
next older posting: Digital Journal with Apple’s Keynote as New Year’s Resolution
next newer posting: Looking back at the postings of 2015