“Parting with people is a sadness;
a place is only a place.”
Hawat in “Dune” by Frank Herbert

So, the last posting has been a while, but not for lack of material. There are a few things I want to write, including an Update on the “Oxford Union Society’s ‘Freedom of Speech and Right to Offend’ Debate” (as expected, one video was taken down — it’s nice to be right, I just wish I’d be right more often with predictions when it comes to nice things).

But yeah, at the moment I don’t have the necessary time and spare concentration to write these more serious postings. Mostly due to the fact that I moved across Germany and took a new job.

Moving was fun. It was high time to leave Tübingen. Given that I did reduce my physical possessions over time (hello digitization), I did everything but one thing by myself. I was thinking about doing everything myself the last time I moved (it wasn’t much stuff then either, quality over quantity) and I wanted to try it. Yup, got a moving van (on the worst possible day at the worst possible time), did load everything in it but one piece (never own anything you cannot move by yourself). But yeah, desks, clothes cabinet, bed, and all my stuff — did do it myself.

And yeah, that thing I did not move completely on my own was the washing machine. I got some small roll-thingies. Once I found out that using only two instead of all four worked better (each can carry about 150 kg, so weight’s no problem), I played chess with a 70 kg washing machine (nearly my weight). You can’t really roll it around easily, but at least, you can move it like the tower in chess (just don’t try to turn it, just don’t … hmm, perhaps when using only one of these roll-thingies turning could have worked … damn). Anyway, I got until the stairs to the house, then a neighbor saw me and offered to help. I would have been rude to decline. 😉 Nah, seriously, a very nice gesture and it was much welcome. After all, it was the last piece and I was pretty much powered out. But it was nice to know that doing everything by yourself works (only took two hours to pack everything in the van).

I did deposit most of my stuff at my parents’ house (400 km from Tübingen). Did I mention that I rarely drive, given that I don’t own a car? I think it was the third time that I drove a car in eight years. A very long transporter. With all my stuff in it. Well, almost all my stuff. I send backups of my data to my parents a couple of days earlier and made sure they arrived safely. I’m curious to know whether something works, not stupid.

Anyway, couple of days later, I took two suitcases and a backpack to Lübeck (where I’m now). The apartment here is … well, it’s old, it has got its … characteristics. But so far, it’s fine. Some things are actually quite nice and hey, I did not have that much time to find a place to stay. 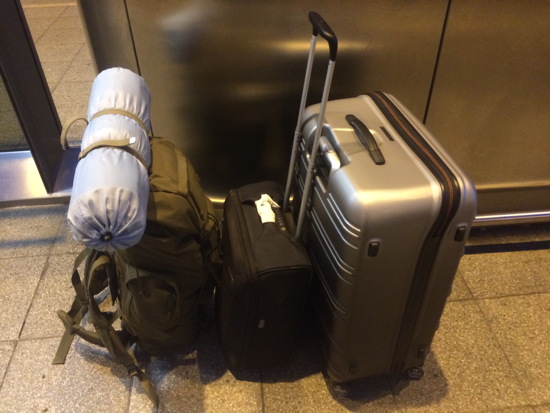 The stuff I brought with me. Mostly clothes (right suitcase), sleeping equipment and notebook (backpack to the left), and some documents and basic necessities (suitcase in the middle).

And yep, I did not bring a bed, but sleeping on a camping mat in a sleeping bag works well. I’ve got an idea for a bed that I want to try out, so bringing my bed would not have made sense. Instead, I’m going to look for a carpenter next month or so. Oh yes, that idea could become a nice bed …

And so far, I’ve missed only three things here that I did not bring: an electric kettle, a hot-water bottle (not sure for which temperatures the sleeping bag was made, but I’m guessing it wasn’t for anything below 20°C), and my document scanner. Bought the first two again (never noticed how much I like tea) while the document scanner should arrive in the mail … hopefully soon. I’ve got some books I’d like to digitize. Otherwise, I like living with the necessities and don’t want any stuff at the moment (save for some books — new town, new used bookstores). Everything else, the city provides, including a very nice albeit somewhat small university library (work rooms!).

So yeah, so far it’s very nice here (a bit confusing to have blood and urine samples taken for what is essentially a very time limited mostly teaching job in academia). And boy, did I miss jumping into a project and working on something that matters to me. The last couple of months did really drain some energy.

But hey, it’s like working full power and recharging at the same time now. Currently work is mostly preparing a lecture in cognitive and perceptual psychology and helping with another one on motivation and emotion. (BTW, I knew that digitizing my study scripts and notes would come in handy one day … mahahawhaw … and hey, looking at recently published books, the changes aren’t that large).

And yup, love the topics, I think it will be useful for the students. Unless I steamroll them with the content … I’ve got to watch that. But who knows, I could spread some enthusiasm for basic processes of human perception and cognition — or drown them in information. Hmmm, will be interesting in any case.

So, the blog still lives, but the content will likely be on the lighter side for a while.