Nearly all men can withstand adversity; If you want to test a man’s character, give him power.
Abraham Lincoln

I’m a fan of comics, graphic novels, computer games, hell, even trashy movies. Because in some instances, these movies can get away with pointing out issues other, more accepted media cannot. After all, it’s trash, we know it’s trash, we don’t have to care that much about it. (Never mind how much money, e.g., computer games make. They put Hollywood to shame.)

Recently, I came upon the following scene in “The Dresden Files — Wild Card”, a comic/graphic novel based on the works of Jim Butcher: 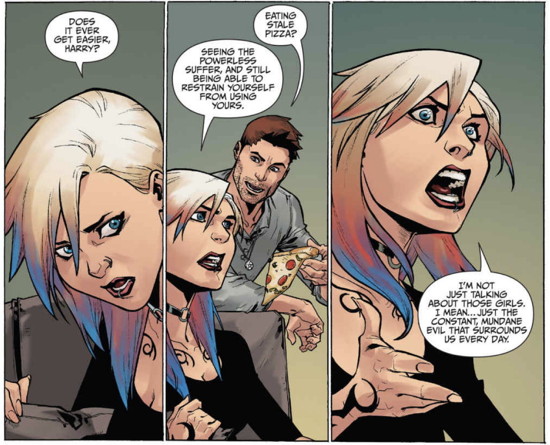 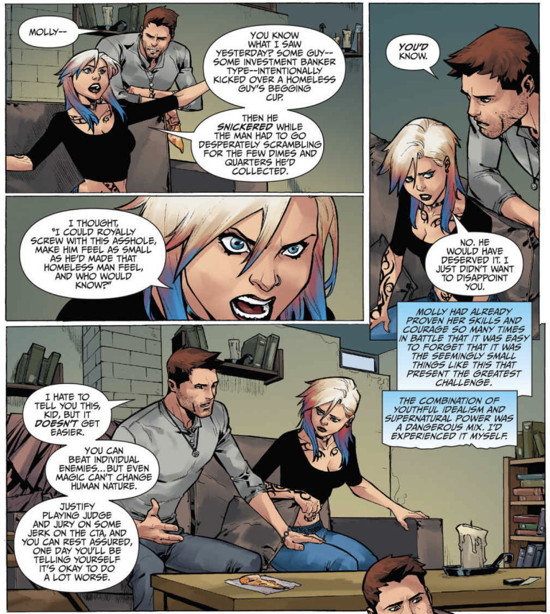 And yeah, Dresden is right — the combination of idealistic youth and power is a dangerous mix.

There is something to be said for youthful energy, for wanting to improve the world, for the drive these people have. But at the same time, they — usually — lack experience, they lack perspective, and they lack wisdom. They might be right (or wrong), depending on some external judge, but like monkey’s writing Shakespeare, they wouldn’t be able to recognize it, or argue for it.

It’s one thing I frequently argue for. Creativity isn’t just doing something new. You can do so easily. Just be insane. But to be actually creative, you not only have to do something different, something that hasn’t been there before, you also have to be useful. You actually have to solve the problem.

And looking how “the youth” is used in various political issues (e.g., migrant crisis, climate change) … I mean, seriously? Where is the argument? Even worse, you are giving people power who are — most likely — not mature enough to handle it. In many cases, they are figureheads to produce useful idiots.

(Social) power should be the last things these children should be handed. But yeah, it fits the overall picture of the left — trying to destroy any concept of value. Including the value of having seen what works and what does not work, how people can be mislead, and how easy it is to fool yourself.

It’s easy to see these people positively — because they are children. But it’s usually because people share their positions. Otherwise, people would like, e.g., Greta Thunberg as much as Soph (e.g., all NSFW: “Be not afraid“, “Pride & Prejudice“, or fitting for the comparison: “Greta“; and yeah, I’m as critical of her as I am of other media figures in a similar age range — it’s mindless (possibly guided) rebellion, nothing more).

Post Navigation
next older posting: Why Creativity is Incompatible with Collectivism/Socialism
next newer posting: Wall Board (to get an overview of/plan projects and tasks)