“I’m very careful about what I put into my body, which means I end up preparing most meals myself.”
Hannibal in “Hannibal” (TV series)

Okay, perhaps the quotation above is not the best intro for a posting about preparing meals, but, yeah, in times of bad food, there is something to be said for preparing food for yourself. Because, for a while now, the usual clinic cafeteria at work is being renovated, so the university cafeteria it is.

Or rather not. The food isn’t really that good at the university cafeteria. Actually, it’s “airline swill” kind of bad.

So, I restarted using my Bento Box.

And boy, does it work well. It doesn’t take that long to prepare. Perhaps 10 minutes (at most) in the kitchen while my morning coffee cools down to drinkable temperatures. And you don’t even need that much. Some salad, something with a bit more fat or calories, and you’re good to go. Yesterday it was fried chanterelles, some tiny tomatoes, green salad, and some cheese. Add some salt and pepper and that’s enough for the day. 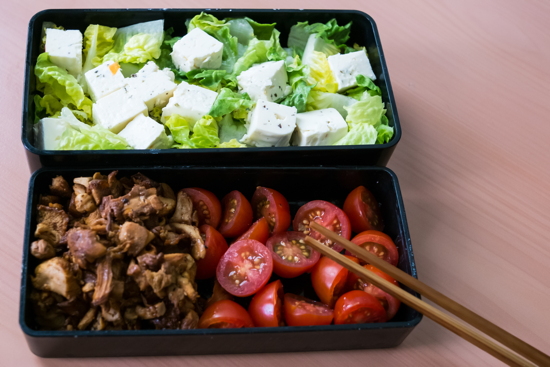 Contents of my typical Bento box.

I can use the evening to prepare a meal that is actually edible.

Still a classic and still, highly recommended. It stood the test of time (and of my stomach).

P.S.: Preparing your meal and taking it with you doesn’t mean you become a recluse during lunchtime. I still enjoy going to lunch with my colleagues for the company. But I only get a coffee or an ice cream during lunch. The real food comes later, in front of my notebook, usually while reading something.