I’ve been a fan of TED presentations for years (before it became cool, *ehrm*; note: TED, not TEDx — TEDx talks are usually bad, sometimes worse than bad). Anyway, given that TED decided to live-stream the opening session of the 2016 conference to a couple of cinemas, I jumped on the chance to see it. In contrast to seeing individual presentations, I finally had opportunity to see a whole session, including the moderation and the transition between presentations.

Given that watching live performances in the cinema has its own affordances (e.g., regarding ballet), here are some impressions:

Chris (curator of the conference) made a suiting remark during the opening session. In some cinemas, there likely are a lot of people, in others only a handful … looking around awkwardly. The cinema I was in was on the later side. Not five people, but perhaps 15 or 20. Problem is, that’s way to few people for an energetic session feeling.

Thinking back, I’m not sure how much of the voices/sound of the audience at TED was transmitted. So it was only the cinema and with the lighting the the space between the groups of people … let’s just say I don’t think you can expect a similar conference atmosphere. At least in Germany, I get the impression that people book seats in the cinema with some distance to the seats that are already booked. So if you want to have an energetic room, you either need to use a smaller room or control the seating.

But done “normally”, not very conductive to people talking to each other when Chris asked the audience to talk to their neighbors. Plus, there wasn’t really a question or topic given, nor was it part of the session itself. It was a filler between performances. It could work (better), if it were part of a session itself. And something you have to do to try something out, or see an effect of something for yourself.

Personally, I also missed some of the other stuff that happens at conferences (haven’t been to TED, but to professional conferences in psychology and computer science). Things like coffee stands, registration, conference bags and the like. There doesn’t have be much in a conference package — a few flyers and perhaps a book or two would be enough. And, of course, a pen and some paper. Stickers and badges would be nice too (for TED, not for a professional conference).

One last thing about the atmosphere was the camera, esp. the editing. I already mentioned it in the posting about ballet performances: I think the camera can make or break a live-stream. Personally, I would have preferred a more “like sitting in the audience” perspective and more panning shots. Quite frankly, the editing was too good.

It was interesting to see a whole session. It became clear that there was some thought put into the order of the speakers, and they were (mostly) well chosen. I was a bit surprised by the moderation — Chris made a professional but also somewhat defensive/listless impression on me (tired? pressure of expectation?). Still, there was a thread going through the sessions and it was nice to watch the individual speakers/performers this way.

So, how good were the speakers? I have high expectations of TED talks, and yup, I’d grade them over the whole spectrum. From very good to abysmal (not necessarily the fault of the speaker, it’s a match-thing). 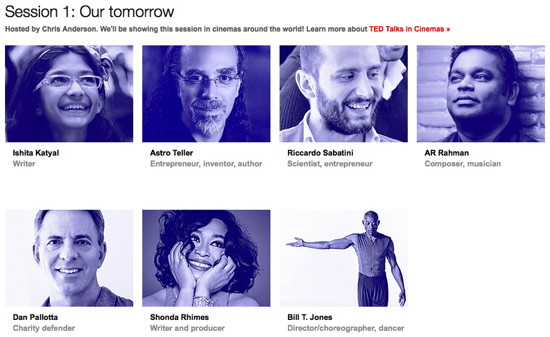 Personally, if it had been videos, I would have stopped the vids of the first (Katyal) and the last presentation (Jones). I probably would stopped the second to last as well (Rhimes). So, watching the session in the cinema had at least the effect of getting me to see something I would not have otherwise seen (in part, for good reasons).

My main problem with the first speaker (Katyal) was that she appeared to be heavily coached. Not only regarding what she said, but also how she said it (gestures). Might be her age (and I might be completely wrong here), but it appeared to me way too deliberate. Too studied. Not natural. And seriously, combined with the speaker being a 10(?) year old child telling the audience what to do? That smacks of emotional “reasoning”/manipulation. At worst, it makes her a mouthpiece, a puppet, used to try to bypass cognition, esp. critical thinking. And sorry, but the problems she mentioned are way too serious for this kind of shit. It also gives a bitter taste when a person clamors for support, when it’s clear from her speech that she received a lot of parental support and education. It’s not exactly “how the other world lives”. And if she’s really a mouthpiece — after all, it’s only my impression — there’s a certain irony here regarding her demand of letting children be children. If you worry about the mentioned issues, something clearly went wrong regarding this demand. But yeah, overall, it’s probably due to the fact that I’m just tired of emotional reasoning. To me, her presentation just wasn’t believable. [BTW, not blaming her, but whoever pulls her strings.]

Teller’s presentation (X, former Google X) was actually very good. I loved his talk — esp. about trying to fail projects as early as possible. And working on the hard problems first. It would not work for opportunists, nor would it work in many companies. But for the kind of people they have — yeah, exactly the right style. Although I wonder whether they bury the projects or whether old projects can be revived if the show-stoppers gets solved.

Sabatini’s talk was — as Chris mentioned — both very inspiring and frightening. Looking at the code of life itself … waow. Then again, playing around with computer programs as a child and seeing how easily computer programs break — and thinking what this would mean for biological code and life, including human life … waow. Also probably the best use of a prop I’ve seen in a long time — bringing the genetic code of a human being on the stage as books — waow, impressive visualization.

The interlude with Rahman’s music was beautiful. I agree with Chris here too. Beautiful, if a bit too relaxing for a darkened cinema. 😉

Pallotta’s talk was a nice surprise at a rather liberal conference. I mean, seriously, if diversity is so great, TED could probably use a few more conservative speakers (Jonathan Haidt would be suiting here). After all, you can’t solve general problems via partisan approaches. But yeah, surprising to hear such a cautionary talk.

Rhimes presentation … hmm, I would have skipped that one. But she had a few good points. Esp. that playing with children can fit into a busy schedule and is needed to recharge. Also nice that she gave the impression of person refusing to play the victim card and instead control her own life. I’d recommend this presentation to a couple of people I know, if I could expect that they would actually listen. But yeah, not something I would have watched, but something I am somewhat glad to have watched.

The OK GO interlude was … waow. Okay, not something you could have done on the stage, so video, but still … impressive. Although I wonder whether the band runs into problems trying to top this. And whether it isn’t time for a more subtle elegance again. But this idea … doing a performance in a zero-g plane … holla. So that happens when a talented and determined band gets a budget, and/or some connections. And damn, I miss sexy stewardesses.

The last presentation by Jones was … not for me. Don’t get me wrong, I love ballet, I love dance, but not this style. I found it much, much too egocentric. It was fun watching the faces of the people the front row (of the actual conference room) though. Yep, life’s always fun when you combine a degree in psychology with sociopathy. 😉

But yup, stayed mainly to hear the closing words of Chris.

So, all in all, was it worth it? Not sure, actually. Some of it was good — and good enough to see the conference at least once this way. But I think at the moment it’s not enough to simply live-stream a conference session. Especially not to a cinema.

Personally, I think TED would be better off to transmit the live-stream not to cinemas but to conference centers. Take major conference centers, e.g., in the capital, and recreate a localized version of TED (e.g., to Berlin in Germany). Not TEDx, not a translated version, but transmit the presentations live to the conference centers. At the same time, offer conference packages, places to talk, to meet, people to facilitate conversations, etc. at these conference centers. Use social media to connect them. Use some virtual windows to connect different places, esp. the satellite conferences among each other (everyone likely wants to talk to the main TED event, but it’s among the satellites where the potential is). Use a booking service to ensure that either there is a critical mass of people at that localized conference or it doesn’t happen. One or two per country could be enough. Especially if you consider the conference staff you’d need. And yup, the time zones are a problem. But for a couple of days, people could probably cope with being up very early or late. Synchronicity beats a more comfortable time slot, at least, if you connect the conference sites.

I mean, if TED wants to scale the conference, I think live-streaming the whole conference and embedding it in actual satellite conference sites — in a place that is well-suited for it (i.e., a conference center) — would probably much more successful than a cinema. At least if it’s not only about entertainment, but also (and more so) about connecting people and making great things happen.

Or to quote Chris: “to help change your life”.

Categories: General, General Tips, Improving your Creativity, Inspiration, Music & other Art, People, Something to Think About, The World

Post Navigation
next older posting: Recommendation: How to Speak — Lecture Tips from Patrick Winston
next newer posting: Writing like a commie, or what the teacher wants to hear vs what you actually believe