People who say they sleep like a baby usually don’t have one.
Leo J. Burke

Sometimes you just love reddit. Digitalnomad had a posting about “The ultimate Digital Nomad workstation for maximum productivity” which linked to this imgur image: 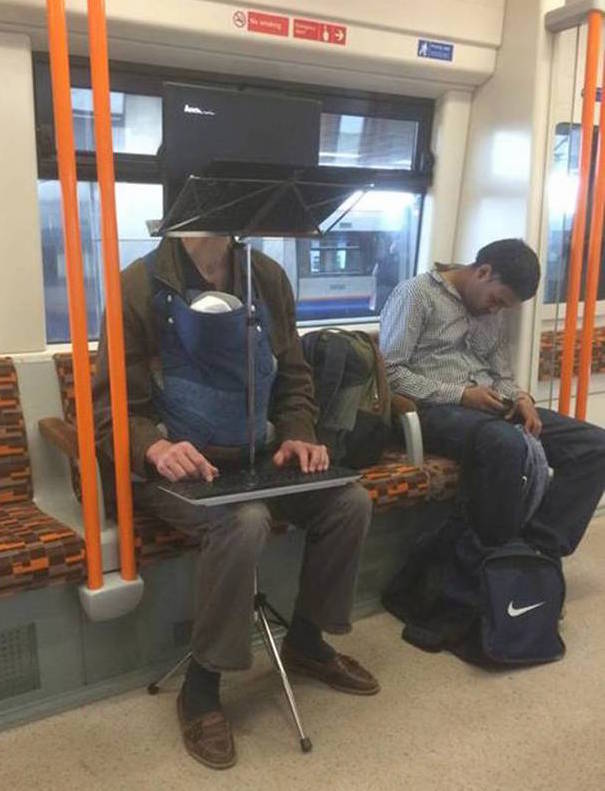 While the comments on reddit question whether the contraption is really stable, it’s an intriguing idea to play with.

One commentator (chillerfx) mentioned that “he needs to be standing for additional +5% of productivity”. Not sure about the stats here, but actually, it might be easier to get a solution that works while standing.

Just imagine a frame securely attached to the notebook with a clip system that fits the orange poles in the image. You’d need something to carry the weight of the notebook, plus the occasional person who might accidentally grab it. But with a secure frame and a clip that uses pressure and a lot of friction, it would work. The keyboard would essentially be the same system but easier. Perhaps a little more distance to the poles. 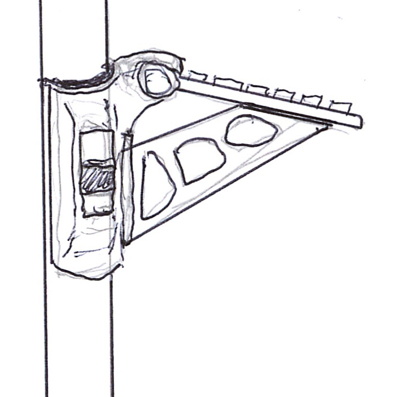 You might want to include a strap you put around you and the pole to ensure that you don’t fall if the subway car accelerates/decelerates quickly. Think of the systems used on small sailing boats when people are cooking.

Downsides: It puts the baby more at risk if you can’t keep your balance.

How about mobile devices?

Sure, sometimes you need the computing power of a notebook, but for other tasks, perhaps a tablet and a Bluetooth keyboard are easier. At the very least, they are easier to carry and there are already commercial frames to keep an iPad in place. Compare this monitor arm for iPads. Given that the screen (the iPad) would be flat on the pole, you could use a much shorter frame for the keyboard itself.

Given that frames for tablets already exist, it should be hard to come up with one that works on subway car poles.

Advantages: Much less to carry, easier to attach, less hassle.

Disadvantages: Less processing power, smaller screen. It also puts the baby more at risk if you can’t keep your balance.

How about a mixed strategy?

Probably the simplest way to work this way is to use an iPad with such a clipping system and attach it to the orange pool, then use a Bluetooth keyboard on your legs.

Advantages: Much less to carry, easier to attach, less hassle, sitting down reduces risk to baby, could even work during rush hour (if you get that seat)

Disadvantages: You’d look to the side, not facing the screen directly. So you might like to change places occasionally.

But why work this way at all?

The whole thing could be a stunt. Just some people having fun. But there might be something to be said for doing this. Well, outside of rush hour, that is. Sure, it’s probably the worst environment for work where you need to concentrate. But I’m also reminded of a couple of parents who were very desperate to get their baby to sleep. And sometimes, the baby only sleeps in the strangest places. And you got to hand it to subways (or streetcars): They have rocking motions that might be calming.

Of course, another strategy would be to try to recreate that environment at home. There are a couple of things that might rock as well.

In any case, except for the extremely risky contraption (most of the weight is at the top in an unstable environment), probably my vote for the most creative working dad of the year. And it might even work very well for those who work in the subway without children.

Categories: General Tips, Improving your Creativity, Infrastructure, Inspiration, Other Tools, People, Something to Think About, Tools