“Well, evil just compounds evil, doesn’t it? First, I’m sentenced to a computer tutorial on Saturday. Now I have to read some computer book. There are books on computers? Isn’t the point of computers to replace books?”
Cordelia in Buffy – The Vampire Slayer 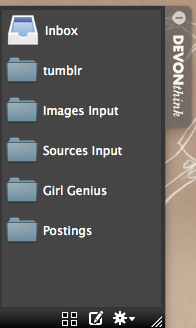 DEVONthinks Sorter — usually always on the lower left side of my screen.

One thing that frequently happens to me when I update DEVONthink is that the Sorter vanishes. This very practical tool is usually on the side of your screen when you have it activated in DEVONthink and allows you to drag files onto it. It then expands and shows you folders from your DEVONthink database(s) (you can customize it). You simply drop the files in the folder and they get copied into the folder of the DEVONthink database (even if it is not open). Very practical when you have downloaded something you want to add to DEVONthink.

However, after some updates it simply vanishes.

Apparently there is a bug regarding the coordinates — so it is still there, but not in a place where you can see it. There are a couple of solutions online that address the coordinates issue in the respective setting file (~/Library/Preferences/com.devon-­technologies.think-­sorter.plist). One suggests using an .plist editor like XCode, another to simple delete the file. As I want to retain the customization of the sorter, I think the easiest solution is to open the file with a text editor (e.g., TextWrangler). The steps are the following (Note: As usual when you play with the settings, things can go wrong. No warranty here.):

Your sorter should reappear — probably not at the same position as before but at least visible and usable again.

Post Navigation
next older posting: Don’t overthink it!
next newer posting: Living and Killing with PowerPoint (or Keynote)

2 Comments on Where the heck is DEVONthink’s Sorter?